Skip to content
Previous Next
Saturday or Sunday – Does it Matter? 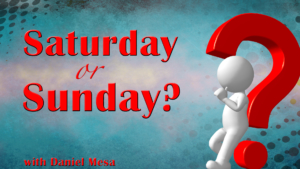 With God the Father as Creator through His Son, look at the first gift of time God gave to man.

Saturday, seventh day of the week; different theories explain name, including that it comes from the Latin Saturni dies, or day of the god Saturn, and that it was named Saturn’s-day by Babylonians after Saturn, one of the 5 planetary bodies known to them; Jewish Sabbath, or holy day; (Compton’s Interactive Encyclopedia).

Sunday, first day of the week. Its English name and its German name (Sonntag) are derived from the Latin dies solis, “sun’s day,” the name of a pagan Roman holiday. (Encarta Encyclopedia).

Saturday, seventh day of the week, named in honor of the Roman god Saturn. In Latin, Saturday was called dies Saturni; it was called Sater-daeg by the Anglo-Saxons. It is the holy day of the Israelites of the Old Testament and in Hebrew is called Sabbath, the only day of the week with a name, the rest being numbered (Encarta Encyclopedia).

Sab-bath (sabth) n. Abbr. S., Sab. 1. The seventh day of the week, Saturday, observed as the day of rest and worship by the Jews and some Christian sects (American Heritage Talking Dictionary).

Sabbath, n. The day which God appointed to be observed by the Jews as a day of rest from all secular labor or employments, and to be kept holy and consecrated to his service and worship. This was originally the seventh day of the week, the day on which God rested from the work of creation; and this day is still observed by the Jews and some christians, as the Sabbath (Webster’s 1828 Dictionary).

Sunday, n. The Christian Sabbath; the first day of the week (Webster’s 1828 Dictionary).

Sabbath (Hebrew Shabbat, derived from the verb shavat, “to rest, cease”), a holy day of rest observed by the Jews and some Christian denominations on the seventh day of the week (see Saturday) and by most Christians on Sunday. The origin of the Sabbath is uncertain… (Encarta Encyclopedia).

Where did the Sabbath come from, anyway?

Can we be sure that the Sabbath is really Saturday? Wasn’t there a change? (Notice the references on page one.)

There is a day of the week called “Good” according to many Protestants. What day is it?

Would a Protestant ever admit that they were not sure when Good Friday or Resurrection Sunday was? Why then question the weekly cycle except to confuse Sabbath keeping?

Why don’t Protestant Pastors say anything about this?

I was host and participant of a television broadcast numerous times, through TCT Ministry, called, “Ask the Pastor.” I spoke with and overheard many of the local Grand Rapids, MI pastors (50+) that said the Sabbath was Saturday, but to them it didn’t matter. (It’s like the religious leaders in Christ’s day—they wanted the law, but not Christ— except today, the religious leaders want Christ and not His law!) We ought to have both, the Moral Law and Jesus Christ!

Look at what many of our Protestant family are being taught…

Easton’s Bible Dictionary, “Sabbath” — After his resurrection, which took place on the first day of the week (Mat_28:1; Mar_16:2; Luk_24:1; Joh_20:1), we never find Christ meeting with his disciples on the seventh day. But he specially honoured the first day [His resurrection day] by manifesting himself to them on four separate occasions [ALL on the same day—His resurrection day] (Mat_28:9; Luk_24:34, 18-33; Joh_20:19-23). Again, on the next first day of the week, Jesus appeared to his disciples (Joh_20:26) [This is not true! Notice John 20:19 – “Then the same day at evening, being the first day of the week, when the doors were shut where the disciples were assembled for fear of the Jews, came Jesus and stood in the midst, and saith unto them, Peace be unto you.” — Evening on resurrection day meant the start of MONDAY! The Bible says many times, the evening and morning makes up the day—See Genesis 1:5. Days in the Bible start at night, and go on till the next sundown]. Some have calculated that Christ’s ascension took place on the first day of the week [Acts 1:3 says Christ was with His disciples 40 days—Count 40 in a weekly cycle from Sunday and you come to Thursday or Friday, right?]. And there can be no doubt that the descent of the Holy Ghost at Pentecost was on that day (Act_2:1). Thus Christ appears as instituting a new day to be observed by his people as the Sabbath, a day to be henceforth known amongst them as the “Lord’s day.” [The only “Lord’s Day” in the Bible is the Sabbath—Mark 2:28]. The observance of this “Lord’s day” as the Sabbath was the general custom of the primitive churches [???], and must have had apostolic sanction (compare Act_20:3-7; 1Co_16:1, 1Co_16:2) and authority, and so the sanction and authority of Jesus Christ. (Bold comments supplied.)

Alright, so according to the Bible, has Sunday been commended as a day of worship to the early and current Christians by the example of the Apostles?

What about breaking bread?

Saying we ought to keep Sunday in honor of the Lord has rather slim pickings for Bible texts to support it! In fact, none at all!

“On these two commandments hang all the law and the prophets” (Matt 22:40).

Is it possible for the law of God to be changed?

By this chart it is clear to see that God’s law is a transcript of His unchangeable character. If God’s law could have been changed, do you think God would have changed it, instead of asking His Son to die because it was broken? Christ’s death is proof that the law of God is immutable!

Did Paul think that we are under grace, not under God’s law?

Are there any examples of Jesus keeping Sabbath?

These are not all of the references so you may wish to download a free Bible program.

Are there any examples of the Apostles keeping the Sabbath?

Why are so many people keeping Sunday instead of Saturday?

Does Revelation say anything about the commandments and the Sabbath day?

What are the prophetic implications of this question?

Exodus 20:3 “Do not worship any other gods besides me. Serve only him.”
Matthew 4:10 “You must worship the Lord your God;

Exodus 20:8 “Remember to observe the Sabbath day by keeping it holy.”
Mark 2:27-28 “The Sabbath was made to benefit people and not people to benefit the Sabbath. And I, the Son of Man, am master even of the Sabbath!”

Exodus 20:12 “Honor your father and mother.”
Matthew 10:37 “If you love your father or mother more than you love me, you are not worthy of being mine.”

Exodus 20:14 “Do not commit adultery.”
Matthew 5:28 “Anyone who even looks at a woman with lust in his eye has already committed adultery with her in his heart.”

Exodus 20:16 “Do not testify falsely against your neighbor.”
Matthew 12:36 “You must give an account on judgment day of every idle word you speak.”