THE VEIL OF THE SANCTUARY

The Father’s presence encircled Christ, and nothing befell Him but that which infinite love permitted for the blessing of the world. Here was His source of comfort, and it is for us. He who is imbued with the Spirit of Christ abides in Christ. The blow that is aimed at him falls upon the Saviour, who surrounds him with His presence. Whatever comes to him comes from Christ. He has no need to resist evil, for Christ is his defense. Nothing can touch him except by our Lord’s permission, and “all things” that are permitted “work together for good to them that love God.” Romans 8:28.  {MB 71.2}

Mathew 8:8 The centurion answered and said, Lord, I am not worthy that thou shouldest come under my roof: but speak the word only, and my servant shall be healed.

8:9 For I am a man under authority, having soldiers under me: and I say to this [man], Go, and he goeth; and to another, Come, and he cometh; and to my servant, Do this, and he doeth [it].   :10 When Jesus heard [it], he marvelled, and said to them that followed, Verily I say unto you, I have not found so great faith, no, not in Israel.

8:11 And I say unto you, That many shall come from the east and west, and shall sit down with Abraham, and Isaac, and Jacob, in the kingdom of heaven.

8:12 But the children of the kingdom shall be cast out into outer darkness: there shall be weeping and gnashing of teeth.

Rev 1:1 The Revelation of Jesus Christ, which God gave unto him, to show unto his servants things which must shortly come to pass; and he sent and signified [it] by his angel unto his servant John:

Rev 14:1 And I looked, and, lo, a Lamb stood on the mount Sion, and with him an hundred forty [and] four thousand, having his Father’s name written in their foreheads.

Rev  14:7 Saying with a loud voice, Fear God, and give glory to HIM; for the hour of his judgment is come: and worship him that made heaven, and earth, and the sea, and the fountains of waters.

It is Christ, the Light of the world. Oil had to be poured into the candlestick for the light. John saw seven lamps of fire burning before the throne of God and he was told that they were “the seven Spirits of God.” We must have oil if we are to be burning and shining lights, and this oil is the Holy Spirit. {March 5, 1903 EJW, PTUK 154.6}

On each end of the mercy seat was the figure of an angel, representing the two anointed ones that stand in the presence of God. From what was shown to Zechariah, we learn that it is through these heavenly beings that the golden oil of God’s Holy Spirit is made to flow from Him to us. {October 10, 1901 EJW, PTUK 650.17}

God says of His angels that they are all “ministering spirits, sent forth to minister for them who shall be heirs of salvation.” Jacob in a dream saw the angels coming and going between heaven and earth. The way to the throne of God is ever open, and these heavenly messengers are the channel through which God pours the golden oil of love and grace into His people. It is through these precious

This Holy Word is as the golden pipes through which the oil was emptied from these anointed ones into the candlesticks. So if we would have always a fresh supply of oil, if we would burn brightly for the glory of God and the good of others, we must study God’s Holy Word, that through this channel His own Spirit may be poured into our hearts. Then we shall “shine as lights in the world, holding forth the Word of life.” {October 10, 1901 EJW, PTUK 651.1}

John 6:63 It is the spirit that quickeneth; the flesh profiteth nothing: the words that I speak unto you, [they] are spirit, and [they] are life.

The oil with which the wise virgins filled their lamps represents the Holy Spirit. “The angel that talked with me,” writes Zechariah, “came again, and waked me, as a man that is wakened out of his sleep, and said unto me, What seest thou? And I said, I have looked, and behold a candlestick all of gold, with a bowl upon the top of it, and his seven lamps thereon, and seven pipes to the seven lamps, which are upon the top thereof: and two olive trees by it, one upon the right side of the bowl, and the other upon the left side thereof. . . . Then answered I, and said unto him, What are these two olive trees upon the right side of the candlestick, and upon the left side thereof? And I answered again, and said unto him, What be these two olive branches, which through the two golden pipes empty the golden oil out of themselves? And he answered me and said, Knowest thou not what these be? And I said, No, my Lord. Then said he, These are the two anointed ones, that stand by the Lord of the whole earth.”  {RH, February 3, 1903 par. 4}

By the holy beings surrounding his throne, the Lord keeps up a constant communication with the inhabitants of the earth. The golden oil represents the grace with which God keeps the lamps of believers supplied. Were it not that this holy oil is poured from heaven in the messages of God’s Spirit, the agencies of evil would have entire control over men.  {RH, February 3, 1903 par. 5}

God is dishonored when we do not receive the communications that he sends us. Thus we refuse the golden oil which he would pour into our souls to be communicated to those in darkness. When the call shall come, “Behold, the bridegroom cometh; go ye out to meet him,” those who have not received the holy oil, who have not cherished the grace of Christ in their hearts, will find, like the foolish virgins, that they are not ready to meet their Lord. They have not in themselves the power to obtain the oil, and their lives are wrecked. But if God’s Spirit is asked for, if we plead, as did Moses, “Show me thy glory,” the love of God will be shed abroad in our hearts. The golden oil will be given to us.  {RH, February 3, 1903 par. 6}

Only by knowing God here can we prepare to meet him at his coming. “This is life eternal,” said Christ, “that they might know thee the only true God, and Jesus Christ, whom thou hast sent.” But many of those who profess to believe in Christ do not know God. They have only a surface religion. They do not love God; they do not study his character; therefore they do not know how to trust, how to look and live. They do not know what restful love is, or what it means to walk by faith. Opportunities to hear and receive the messages of God’s love are unappreciated and unimproved. They fail of understanding that it is their duty to receive, in order that they may enrich others.  {RH, February 3, 1903 par. 7}

The world by wisdom knows not God. Many have talked eloquently about him, but their reasoning brings men no nearer to him, because they themselves are not in vital connection with him. Professing themselves to be wise, they become fools. Their knowledge of God is imperfect. They are not conformed to him.  {RH, February 3, 1903 par. 8}

Christ is a perfect revelation of God. “No man hath seen God at any time,” he says; “the only begotten Son, which is in the bosom of the Father, he hath declared him.” Only by knowing Christ can we know God. And as we behold him, we shall be changed into his image, prepared to meet him at his coming.  {RH, February 3, 1903 par. 9}

But no man can impart that which he himself has not received. In the work of God, humanity can originate nothing. No man can by his own effort make himself a light bearer for God. It was the golden oil emptied by the heavenly messengers into the golden tubes, to be conducted from the golden bowl into the lamps of the sanctuary, that produced a continuous bright and shining light. It is the love of God continually transferred to man that enables him to impart light. Into the hearts of all who are united to God by faith the golden oil of love flows freely, to shine out again in good works, in real, heartfelt service for God.  {COL 418.5}

From the two olive trees, the golden oil was emptied through golden pipes into the bowl of the candlestick and thence into the golden lamps that gave light to the sanctuary. So from the holy ones that stand in God’s presence, His Spirit is imparted to human instrumentalities that are consecrated to His service. The mission of the two anointed ones is to communicate light and power to God’s people. It is to receive blessing for us that they stand in God’s presence. As the olive trees empty themselves into the golden pipes, so the heavenly messengers seek to communicate all that they receive from God. The whole heavenly treasure awaits our demand and reception; and as we receive the blessing, we in our turn are to impart it. Thus it is that the holy lamps are fed, and the church becomes a light bearer in the world.  {TM 510.1}

We know that the lamps which give us light have no light in themselves. They cannot fill themselves. So the holy appointed ones must empty the golden oil into the golden tubes. And the heavenly fire, when applied, makes them burning and shining lights. Our hearts cannot reflect light until there is a vital connection with heaven. This alone can make them burn steadily with holy, unselfish love for Jesus, and for all who are the purchase of His blood. And unless we are constantly replenished with the golden oil, the flame will die out. Unless the love of God is an abiding principle in our hearts, our light will go out. . . .  {TDG 98.3}

Satan seems paralyzed as he beholds the glory and majesty of Christ. He who was once a covering cherub remembers whence he has fallen. A shining seraph, “son of the morning;” how changed, how degraded! From the council where once he was honored, he is forever excluded. He sees another now standing near to the Father, veiling His glory. He has seen the crown placed upon the head of Christ by an angel of lofty stature and majestic presence, and he knows that the exalted position of this angel might have been his.  {GC 669.1}

2Co 5:17  Therefore if any man be in Christ, he is a new creature: old things are passed away; behold, all things are become new.

2Co 5:18  And all things are of God, who hath reconciled us to himself by Jesus Christ, and hath given to us the ministry of reconciliation;

2Co 5:19  To wit, that God was in Christ, reconciling the world unto himself, not imputing their trespasses unto them; and hath committed unto us the word of reconciliation.

2Co 5:20  Now then we are ambassadors for Christ, as though God did beseech you by us: we pray you in Christ’s stead, be ye reconciled to God.

2Co 5:21  For he hath made him to be sin for us, who knew no sin; that we might be made the righteousness of God in him. 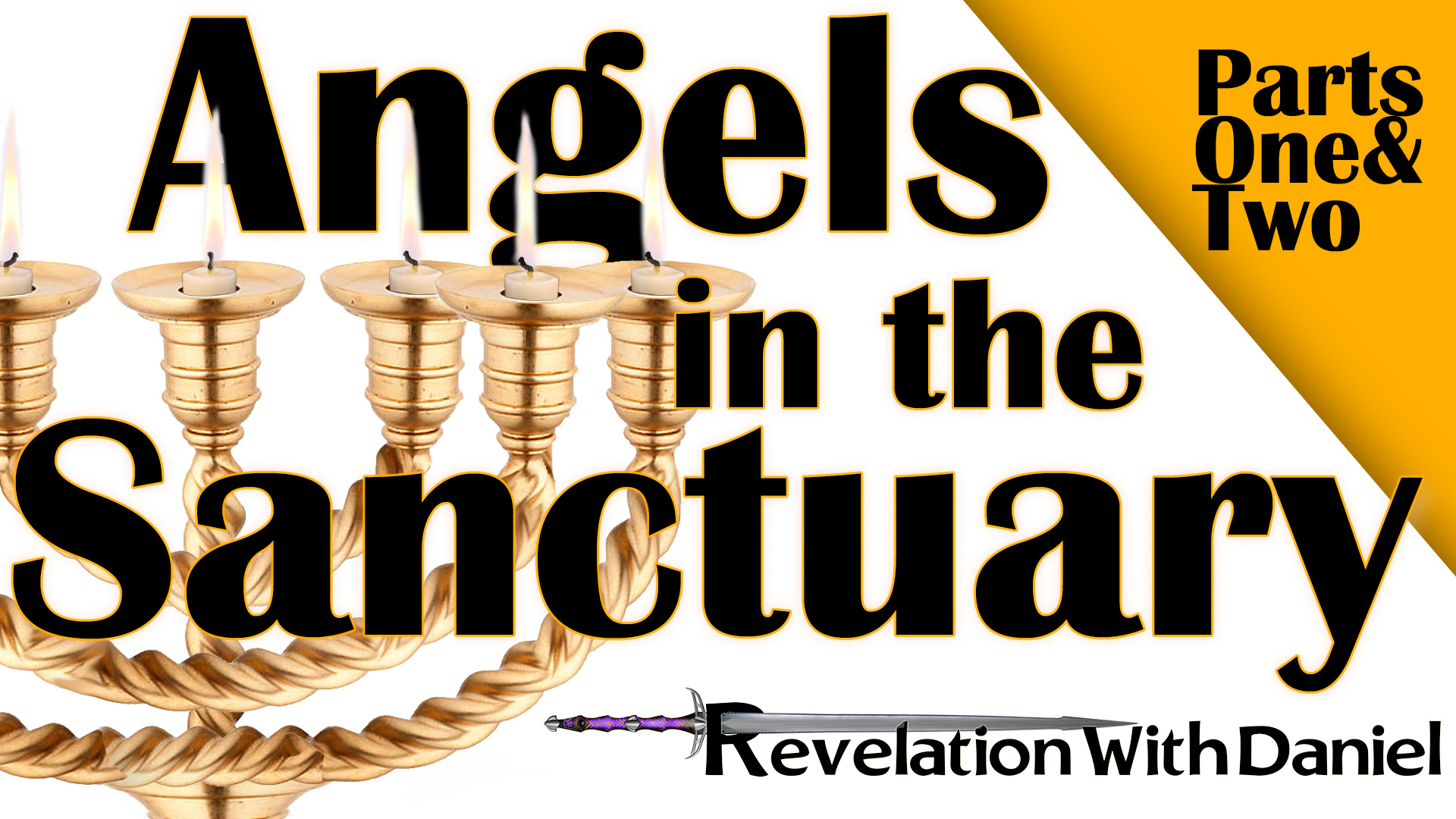