Skip to content
Previous Next
Worshipping Jesus with Daniel Mesa 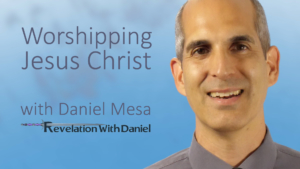 Are we to worship Jesus?

Let’s see what the Bible says. My name is Pr Daniel Mesa at RevelationWithDaniel.com.

John 1:2 The same was in the beginning with God.

John 1:3 All things were made by him; and without him was not any thing made that was made.

John 1:14 The Word was made flesh, and dwelt among us, (and we beheld his glory, the glory as of the only begotten of the Father,) full of grace and truth.

Matthew 16:16 Simon Peter answered and said, Thou art the Christ, the Son of the living God.

Is he to be worshiped? Of course!

Genesis 18:1 ¶ And the LORD appeared unto him in the plains of Mamre: and he sat in the tent door in the heat of the day;

Genesis 18:2 And he lift up his eyes and looked, and, lo, three men stood by him: and when he saw them, he ran to meet them from the tent door, and bowed himself toward the ground,

Genesis 18:3 And said, My Lord, if now I have found favour in thy sight, pass not away, I pray thee, from thy servant:

Joshua 5:13 It came to pass, when Joshua was by Jericho, that he lifted up his eyes and looked, and, behold, there stood a man over against him with his sword drawn in his hand: and Joshua went unto him, and said unto him, Art thou for us, or for our adversaries?

Joshua 5:14 And he said, Nay; but as captain of the host of the LORD am I now come. And Joshua fell on his face to the earth, and did worship, and said unto him, What saith my lord unto his servant?

Joshua 5:15 And the captain of the LORD’S host said unto Joshua, Loose thy shoe from off thy foot; for the place whereon thou standest is holy. And Joshua did so.

Matthew 2:1 Now when Jesus was born in Bethlehem of Judaea in the days of Herod the king, behold, there came wise men from the east to Jerusalem,

Matthew 2:2 Saying, Where is he that is born King of the Jews? for we have seen his star in the east, and are come to worship him.

Matthew 2:10 When they saw the star, they rejoiced with exceeding great joy.

Matthew 2:11 And when they were come into the house, they saw the young child with Mary his mother, and fell down, and worshipped him: and when they had opened their treasures, they presented unto him gifts; gold, and frankincense, and myrrh.

Luke 5:8 When Simon Peter saw it, he fell down at Jesus’ knees, saying, Depart from me; for I am a sinful man, O Lord.

John 20:26 After eight days again his disciples were within, and Thomas with them: then came Jesus, the doors being shut, and stood in the midst, and said, Peace be unto you.

John 20:27 Then saith he to Thomas, Reach hither thy finger, and behold my hands; and reach hither thy hand, and thrust it into my side: and be not faithless, but believing.

John 20:28 And Thomas answered and said unto him, My Lord and my God.

John 20:29 Jesus saith unto him, Thomas, because thou hast seen me, thou hast believed: blessed are they that have not seen, and yet have believed.

Revelation 5:11 And I beheld, and I heard the voice of many angels round about the throne and the beasts and the elders: and the number of them was ten thousand times ten thousand, and thousands of thousands;

Revelation 5:12 Saying with a loud voice, Worthy is the Lamb that was slain to receive power, and riches, and wisdom, and strength, and honour, and glory, and blessing.

Revelation 5:13 And every creature which is in heaven, and on the earth, and under the earth, and such as are in the sea, and all that are in them, heard I saying, Blessing, and honour, and glory, and power, be unto him that sitteth upon the throne, and unto the Lamb for ever and ever.

Revelation 5:14 And the four beasts said, Amen. And the four and twenty elders fell down and worshipped him that liveth for ever and ever.

John 5:27 And hath given him authority to execute judgment also, because he is the Son of man.

Angels have been commanded to worship Him – Heb 1:4-6

Hebrews 1:4 Being made so much better than the angels, as he hath by inheritance obtained a more excellent name than they.

Hebrews 1:5 For unto which of the angels said he at any time, Thou art my Son, this day have I begotten thee? And again, I will be to him a Father, and he shall be to me a Son?

Hebrews 1:6 And again, when he bringeth in the firstbegotten into the world, he saith, And let all the angels of God worship him.

In prayer Jesus said His Father is the only TRUE God – John 17:3

John 17:3 This is life eternal, that they might know thee the only true God, and Jesus Christ, whom thou hast sent.

Philippians 2:10 That at the name of Jesus every knee should bow, of things in heaven, and things in earth, and things under the earth;

Philippians 2:11 And that every tongue should confess that Jesus Christ is Lord, to the glory of God the Father.

I choose to worship the Jesus Christ the Son, to the glory of His Father. What about you?