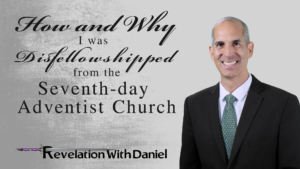 It’s very possible that the others involved in this quandary will remember the details a bit differently than I do, but this is how I recall the situations to the best of my ability in a succinct way.

If you too have a story to share, please send that story through an email here.

Toward the end of 2014 I was studying the book of Revelation to teach it as a series of verse by verse lectures. I knew Revelation 3:14 would give me trouble in my current understanding as a senior and or credentialed Seventh-day Adventist pastor from 2000-2016 (at the time I was not hired by the conference as a pastor, yet held credentials from my last pastoral assignment). The verse says, “unto the angel of the church of the Laodiceans write; These things saith the Amen, the faithful and true witness, the beginning of the creation of God” (Revelation 3:14). That series in 2015 was posted on the RevelationWithDaniel.com website and YouTube page (since then I have planned to update the series with a deeper understanding of who God is, but there’s no set time frame for those updates. I am prayerfully going forward and would LOVE to do it, but God has other things in mind for me at this time).

In preparing for the potential controversy over that verse, I found over 104 Bible verses that help explain the relationship between God the Father and His Son. Since then the verses found went up to 307, which can be seen online here. After finding those verses, I searched specific phrases from those verses in the writings of Ellen G. White, to see if I had missed something in my understanding. Nope! She wrote just what the Bible did! The Father and the Son are really a father and a son—and it’s not metaphorical!

After learning a ton about God in the Bible, I waited two years before sharing publicly, but shared a lot interpersonally, while at the time working for Secrets Unsealed (which later cost me that job which I had for 2.5 years).

Before sharing publicly, I happened to share with the wrong people. The conference was a group that found out that I shared about “The Comforter in John 14-16.”

I went on a preaching tour to Australia for 5 weeks just after the conference had learned about the Comforter message, and while I was in Australia, an elder at my local church in Orosi, CA presented a message entitled, “Who is the God of Revelation 14:7?” Upon returning I learned I had two days to be at a business meeting where the conference president and the assistant (or secretary) would be there to help facilitate the start of the censure of five of us, all elders in the Orosi, CA Seventh-day Adventist church, because of what we believed. This was April of 2017.

That business meeting didn’t go so well—in fact, due to the attitude brought from the conference leadership, an elder resigned his church position… so did the Sabbath school superintendent, so did the first deacon and Sabbath school teacher, other Sabbath school teachers spoke up, the treasurer stated a resignation after someone could be found as a replacement, and perhaps others. The conference president was a bit surprised and called for another meeting in two weeks so the church could take a vote. (It’s strange, as many at that meeting and afterwards spoke up that they too believed the same about God as the elders in question, yet the elders were the only ones suggested to be censured…?)

It is noteworthy that a person who was at both business meetings remembers, “In the first meeting all from the ones who were being censored brought up Bible verse after Bible verse but the conference side only would refer to the church manual and had it up at the podium, but no Bible.”

The next meeting was two weeks later with the conference president, the assistant (or secretary), and one retired worker. Near the start of the meeting, one of the elders to be censured handed the president a letter which contained his church membership resignation. The president read the letter and said to those in attendance, “We are so sorry for this church membership resignation…” He then coldly said (something very similar) to the elder who turned it in, “Mr ________, this meeting is for Seventh-day Adventist members. You are dismissed.”

An opportunity was given for the remaining elders in question to state their case before the members at the church business meeting, as the church manual allows for one hour. Now there were four left in question, as one had resigned membership, and I personally didn’t want to share in that setting, as I hadn’t yet been asked about my faith from any pastor or conference representative. (What would I say, since I had not received any feedback on what their challenge to me was?)

After the conference brethren deliberated, the president said that the Orosi church would be brought up at the next executive committee, to consider stripping it of it’s church status and modify it to a company, or branch Sabbath school (a group recognized by the conference, but not an official organized church). Why? So that the local church would not have any local authority, but that rather, the governing board of that branch Sabbath school would be the conference executive committee.

It was a Thursday at the time of that local church business meeting, and the next executive committee meeting would be held that next Sunday morning. They did vote to take away the church status, and then following voted to censure the four of us for the next six months, contingent upon our meeting with them to have an opportunity to speak about our current religious convictions.

At that second business meeting, when we were showing our allegiance to Bible truth, the conference president looked at a conference retiree and in front of everyone insinuated that her retirement could be on the line for her change in beliefs! In other words, it seemed he was threatening her. It didn’t happen, but it was pretty shocking at the time.

A short time after these meetings, 45 members, give or take a couple, decided that we would meet elsewhere, other than at the local branch Sabbath school, to worship God and His Son freely, as the Bible teaches.

The four elders were invited to come a month later to the next conference executive committee. This time I was fully aware of what their issues were, so I was more than happy to speak before the counsel. One of the elders opted out, while three of us took about twenty minutes each to fill the space of one hour that we were allotted. The two elders before me spoke with clarity and conviction. Interestingly, I chose not to plan or prepare for that meeting, as I had recalled the Scripture that says, “When they deliver you up, take no thought how or what ye shall speak: for it shall be given you in that same hour what ye shall speak. For it is not ye that speak, but the Spirit of your Father which speaketh in you” (Matthew 10:19-20). I was on my way to the meeting, which takes about an hour to drive. Just about half way there I was praying for the meeting, that I would be Christian and kind… and a flash-thought came into my mind of exactly where I should go in the direction of my speaking… I was so blessed I wiped my eyes while driving and praised God for fulfilling His Word!

The message I gave was mainly Scripture interspersed with my personal testimony of being a pastor, studying diligently, always learning, and coming to a conclusion that is much more Biblical than what I had previously understood as a trinitarian. I ended saying something like, “If I am censured by this meeting today, it is not because I have been unfaithful to God, have stopped paying tithe, have been unfaithful to my wife, have started drinking, doing drugs again, or cursing and swearing, being a thief, or any such thing. It will be for one reason, and one reason only—because I have studied my Bible.” I closed my Bible and sat down.

They did censure the four of us, and instead of personal visits with redemptive purposes, they sent certified letters, each costing nearly $8.00—which was more expensive than it would have cost for the fuel for a representative to visit each of us to pray and study (the pastor visited me once before this time, after my strong on-the-phone-request).

At the end of six months of being censored, and a few bulk emails from the local pastor, the censured elders each received another $8.00 certified letter from the conference (without redemptive phone calls, visits, or emails). The letters stated that we would be given another two months of censure.

In that two months there was a local series of presentations organized by the conference that would try and substantiate the trinity doctrine. Four Doctors from either Andrews University or the Biblical Research Institute were organized to present messages in Dinuba, CA (15 minutes from the Orosi church) that they hoped would bring us back in line with the new teaching about God in the Seventh-day Adventist denomination. The trinity has been an official teaching since 1980, voted at the general conference in Dallas, TX. The original Seventh-day Adventist church never held that position.

After that series the local pastor called me! The conversation must have been less than a minute. He said something like, “Hello brother Daniel. After the series of meetings on the trinity, what are your thoughts? Are you coming back to church?” My answer was something like, “That series of meetings only solidified each of us in our newly found faith. We all could see the flagrant misapplications of Scripture, the writings of Ellen White, and history to try to sustain the unsustainable doctrine of the trinity. In fact, we plan to respond to each of their presentations, showing that we were willing to listen, study, and have nothing to hide.” He said something like, “Okay, thank you. God bless. Good bye.”

At the end of the two months of censorship, we each received another $8.00 certified letter that explained that we each had been given another extended four months of censorship. We all agreed that we would much rather have had a personal visit or phone call that would have shown a bit more care and concern.

I don’t recall much interaction happening in that last four months time other than a private meal with the local Orosi pastor and a couple meals with a different pastor in that vicinity. At the end of that four months we each received the final $8.00 certified letter from the conference that we were now disfellowshipped.

The entire experience was really a shame on the conference who held responsibility for the five to be censured, having taken into their own hands the leadership of that church that was made into a branch Sabbath school to be manhandled by them to cause the majority to want to leave and worship elsewhere. This calls us to pray for the church, its leaders, the members… many of whom do not have enough clarity of the issues at hand.

Regarding the other 40+ people who believe the same about God and started worshipping together elsewhere; they still worship together, have made a significant impact in ministry, and still enjoy fellowship “with the Father, and with his Son Jesus Christ” (1 John 1:3).

You may be interested in “An Open Letter to Seventh-day Adventist Pastors.”