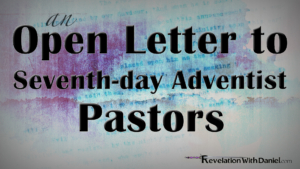 The reader will find below a numbered series of thoughts that were put together by a currently employed Seventh-day Adventist pastor in an effort to establish the doctrine of the trinity using mostly Ellen White’s writings. These thoughts came to me in the order following, and were originally numbered as they are. I’ve added responses in blue considering the context of each passage with additional Bible verses.

We cannot define or understand the Holy Spirit beyond what inspiration says.

“It is not essential for you to know and be able to define just what the Holy Spirit is. Christ tells us that the Holy Spirit is the comforter, and the Comforter is the Holy Ghost, “the Spirit of truth, which the Father shall send in My name.” EGW letter to Brother Chapman, June 11th, 1891, Manuscript Release Volume 14, No. 1107).

“There are many mysteries which I do not seek to understand or to explain; they are too high for me, and too high for you. On some of these points, silence is golden. Piety, devotion, sanctification of soul, body, and spirit–this is essential for us all. “This is life eternal, that they might know Thee, the only true God, and Jesus Christ, whom Thou hast sent.” (Ibid)

“Those who seek to define God are on forbidden ground. We are to enter into no controversy regarding God—what He is and what He is not. He, the Omniscient One, is above discussion. Those who express such sentiments regarding Him show that they are departing from the faith.” Letter 240-1903.

“Let no one teach things that the Redeemer, He who owns man, body, soul, and Spirit has not taught. We need not any fanciful teaching regarding the personality of God.” Letter 240, 1903.

Christ Refers to the Holy Spirit as “He”.

John 14:15   “If you love Me, keep My commandments. 16 And I will pray the Father, and He will give you another Helper, that He may abide with you forever— 17 the Spirit of truth, whom the world cannot receive, because it neither sees Him nor knows Him; but you know Him, for He dwells with you and will be in you. 18 I will not leave you orphans; I will come to you.

John 14:25   “These things I have spoken to you while being present with you. 26 But the Helper, the Holy Spirit, whom the Father will send in My name, He will teach you all things, and bring to your remembrance all things that I said to you.

John 16:13 However, when He, the Spirit of truth, has come, He will guide you into all truth; for He will not speak on His own authority, but whatever He hears He will speak; and He will tell you things to come.

The Holy Spirit must be separate from the Father and the Son, as sinning against Him is not-forgivable:

Mark 3:28   “Assuredly, I say to you, all sins will be forgiven the sons of men, and whatever blasphemies they may utter; 29 but he who blasphemes against the Holy Spirit never has forgiveness, but is subject to eternal condemnation”— 30 because they said, “He has an unclean spirit.”

1John 5:6   This is He who came by water and blood—Jesus Christ; not only by water, but by water and blood. And it is the Spirit who bears witness, because the Spirit is truth. 7 For there are three that bear witness in heaven: the Father, the Word, and the Holy Spirit; and these three are one. 8 And there are three that bear witness on earth: the Spirit, the water, and the blood; and these three agree as one.

Note: This is very similar to Ellen White’s comment:

“There are three living persons of the heavenly trio; in the name of these three great powers—the Father, the Son, and the Holy Spirit—those who receive Christ by living faith are baptized and these powers will cooperate with the obedient.” In Heavenly Places, 336

The Holy Spirit is separately referred to during baptism, at the direction of Jesus

Matt. 28:18   And Jesus came and spoke to them, saying, “All authority has been given to Me in heaven and on earth. 19 Go therefore and make disciples of all the nations, baptizing them in the name of the (1) Father and of the (2) Son and of the (3) Holy Spirit, 20 teaching them to observe all things that I have commanded you; and lo, I am with you always, even to the end of the age.” Amen.

9 “Sin could be resisted and overcome only through the mighty agency of the Third Person of the Godhead.” The Desire of Ages, 671.

“The eternal heavenly dignitaries—God, and Christ, and the Holy Spirit—arming them [the disciples] with more than mortal energy, . . . would advance with them to the work and convince the world of sin.—Manuscript 145, 1901.” Evangelism, 616.

“We are to co-operate with the three highest powers in heaven,—the Father, the Son, and the Holy Ghost,—and these powers will work through us, making us workers together with God.”—Special Testimonies, Series B, No. 7, p. 51. (1905)” Ibid.

“The three powers of the Godhead have pledged their might to carry out the purpose that God had in mind when he gave to the world the unspeakable gift of his Son.” Review and Herald, July 18, 1907, par. 3.

“The three powers of the Godhead, the Father, Son, and Holy Spirit, are pledged to be their [those who have been baptized] strength and their efficiency in their new life in Christ Jesus.” Australasian Union Conference Record, October 7, 1907, par. 9.

“There are three living persons of the heavenly trio; in the name of these three great powers—the Father, the Son, and the Holy Spirit—those who receive Christ by living faith are baptized and these powers will cooperate with the obedient.” In Heavenly Places, 336; Evangelism, 615.

“There are three living persons of the heavenly trio. In the name of these three powers,—the Father, the Son, and the Holy Ghost, those who receive Christ by living faith are baptized, and these powers will cooperate with the obedient subjects of heaven in their efforts to live the new life in Christ.” Bible Training School, March 1, 1906, par. 2; Special Testimonies, Series B, No. 7, 63.

“The rite of baptism is administered in the name of the Father, and of the Son, and of the Holy Ghost. These three great powers of heaven pledge themselves . . . .” Manuscript Releases, vol. 6, 27.

The Temple of the Holy Spirit is within our hearts.

It is a sacred work in which we are engaged. The apostle Paul exhorts his brethren, “Having therefore these promises, dearly beloved, let us cleanse ourselves from all filthiness of the flesh and spirit, perfecting holiness in the fear of God.” [2 Corinthians 7:1.] It is a duty that we owe to God to keep the spirit pure, as a temple for the Holy Ghost. If the heart and mind are devoted to the service of God, obeying all his commandments, loving him with all the heart, might, mind, and strength, and our neighbor as ourselves, we shall be found loyal and true to the requirements of Heaven. CTBH 161.2

1Cor. 6:19 Or do you not know that your body is the temple of the Holy Spirit who is in you, whom you have from God, and you are not your own?

The spiritual work of our sanitariums is not to be under the control of physicians. This work requires thought and tact, and a broad knowledge of the Bible. Ministers possessing these qualifications should be connected with our sanitariums. They should uplift the standard of temperance from a Christian point of view, showing that the body is the temple of the Holy Spirit, and bringing to the minds of the people the responsibility resting upon them as God’s purchased possession to make mind and body a holy temple, fit for the indwelling of the Holy Spirit.—Testimonies for the Church 7:75 (1902)

John 14:7   “If you had known Me, you would have known My Father also; and from now on you know Him and have seen Him.”

“The work of the Holy Spirit is immeasurably great. It is from this source that power and efficiency come to the worker for God; and the Holy Spirit is the comforter, as the personal presence of Christ to the soul.” The Home Missionary, November 1, 1893

“The voice of God calls you as it did Elijah. Come out of the cave and stand with God and hear what He will say unto you. When you will come under the divine guidance, the Comforter will lead you into all truth. The office of the Holy Spirit is to take the things of Christ as they fall from His lips, and infuse them as living principles into the hearts opened to receive them. Then we will know both the Father and the Son.” Manuscript releases volume 14, no. 1106, Letter 40 To Uriah Smith, December 31st 1890, pp. 10-11).

An End Time Poem for All SDAs:

By Pastor Daniel Mesa at RevelationWithDaniel.com

Trouble is before us; the mark of the beast,
And we must now plead with our High Priest,
To deliver us all from certain death,
To give God glory with every breath.

We are now living at the end of time,
All are encouraged toward on upward climb.
It’s impossible to describe the solemnity,
We all must have toward eternity.

One great question, is it the Spirit of Christ,
Or a demonic and spiritualistic poltergeist?
We all must know, and this is for sure,
As we don’t want the devil, most concur.

Is there a Father, and is there a Son?
Is God a tri-unity, making three in one?
Is the Spirit a ghost, a breath, or a wind?
Or the Spirit of Christ that the Father did send?

The Bible does bring us the mind of our Lord.
We CHOOSE to be brothers of one accord.
But we cannot be united outside of the truth,
As God is preparing His army of youth.

The Bible has shown us the only true God,
And everything else is declared Ichabod!
The Father, the Son, the Spirit—it’s true…
But don’t be fooled, it is Christ in you!

Is a divine being within each body?
Or are we a temple, three gods to embody?
How have we come so far to be blind,
That it’s the Spirit of God, His will or His mind?

Many people today have an affinity,
For what the Bible does not call the trinity.
It is outside of Scripture from its conception,
And is now for the world a grand deception!

What is your spirit, a ghost or a form?
No! That’s spiritualism, Laodicean, lukewarm?!
So while we are waiting as a bride for the Groom,
I ask the question, where did this come Froom?

In finding the answers we must pray for the truth!
We must search high and low in the Bible—a sleuth!
In Revelation it’s a demon, a spirit, or frog,
But in Adventist history, it’s a doctor, Kellogg!