Skip to content
Previous Next
Judy Palermo’s Experience in the SDA Conference Church
The following, as written by Judy: 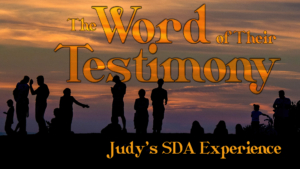 I found a copy of the Great Controversy in a thrift shop & read about the Sabbath. I made the Sabbath as my day of rest & the horses had off from work too. I found an SDA church nearby so I started attending. I was an ex-New Ager & an atheist so I did not really know anything about Christian things.
In this church right off the bat I was told that I did not dress very well or pray very well. That was a great start for me. I was not fond of churches or Christians to begin with, but I wanted to learn more. I stuck it out & found more books by Ellen White & from Counsels on diet & foods, I became a vegan & lost weight, changed my dress & my whole life changed as well from Reading the Bible & EGW books.
The church made me Health & Temperance leader & I would find a Bible verse, then read something to correspond in the SOP, so I was speaking God’s words & not my own words. I was told by the leadership that I was giving the people too much Bible & SOP & I would get in trouble if I quoted too much from the EGW books.
I did not know what was going on because I was giving them messages from God’s Bible & SOP & I was in an SDA church. I was certainly confused, but I decided not to be a dumb dog that would not bark & do what God wanted me to say & do. I kept getting into trouble over standing up for the truth more & more.
This church was stressing me out & I started getting physically sick. I came home shaking & crying, but it took me a few months to figure out that God was calling me out of the church. The more I read the Bible & SOP the more I realized that there was no match between what I was studying & what I saw going on in the church & conference. That was causing the intense feelings after the service.
At the time I was in AA & OA 12 step programs & I had to go to an AA meeting & an OA meeting just to calm my nerves so I could stand going to church on the Sabbath. On the last day I was in the church I heard so called “Christian” rock music being played loudly before the service started. I was freaked out because the elders knew I was battling an addiction to rock music & staying abstinent from food addictions, but I kept being tempted by the music they played & the addictive foods being served at potlucks. I was always invited to pizza & ice cream parties, but I refused to allow them to tempt me. I stayed clean, sober, & abstinent by the grace of God & walked out of the church before they stoned me for obeying God & not man.
A few weeks later I was shown the truth about the one true God & renounced the trinity for good.
Blessings, Judy Palermo
RwD2019-09-11T13:45:58-07:00