Skip to content
Previous Next
HR 6666… is it the Mark of the Beast? 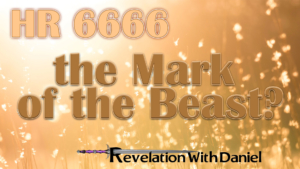 Revelation 15:2 And I saw as it were a sea of glass mingled with fire: and them that had gotten the victory over the beast, and over his image, and over his mark, and over the number of his name, stand on the sea of glass, having the harps of God. https://www.congress.gov/bill/116th-congress/house-bill/6666

In order to understand the history of this number, let’s understand a bit about the beast.

Okay, so the beast has worked hard to ‘personate’ Jesus Christ, and it’s done a good job! AND, the IMAGE of the beast—the one associated with the number 666 in question (13:15-17)—will look similar to the original beast!

So, a “beast” in Bible prophecy is a symbol of a nation, as seen in the prophetic book of Daniel:

Daniel 7:17 These great beasts, which are four, are four kings, which shall arise out of the earth.

Daniel 7:23 Thus he said, The fourth beast shall be the fourth kingdom upon earth, which shall be diverse from all kingdoms, and shall devour the whole earth, and shall tread it down, and break it in pieces.

Considering the second beast of Revelation 13:11-18, there will be, according to the symbolism of prophecy, a beast (or kingdom), which will come up in an unpopulated area. Wait, what?!

You see, the Bible says that the waters the first beast of Revelation 13:1-10 comes out of represents something… (notice that it is a beast with seven heads, just as the one in 17:1-3).

Revelation 17:15 And he saith unto me, The waters which thou sawest, where the whore sitteth, are peoples, and multitudes, and nations, and tongues.

In other words, the waters (the beast was ‘upon’ in Revelation 17:1, and which the beast rose “up out of” in 13:1) represent a bunch of people—a high population.

And it’s Christian. Wait, what?!

Notice carefully the wording and my comments in italics and blue:

Revelation 13:11 And I beheld another beast (nation, because of the lack of crowns) coming up (go up, arise, or ascend, in the Greek) out of the earth (an unpopulated area); and he had two horns (symbols of power, like the ram in Daniel 8:3 and 20 representing Media and Persia) like a lamb (looking Christian, as it’s predecessor of verses 1-10), and he spake as a dragon (Satan is the dragon, as mentioned in Revelation 12:7-11).

Revelation 13:12 And he (the kingdom which came up in an unpopulated area of the world) exerciseth all the power (authority or ability, in the Greek) of the first beast before him (the kingdom which did it’s best to not only personate Christ, but persecute God’s people—13:7), and causeth (to make, in the Greek) the earth (a world-wide movement) and them which dwell therein (all the people) to worship (church and state) the first beast (the Christ-personating kingdom which persecuted God’s people), whose deadly wound was healed (a time after that persecuting power was gone, yet it made its way back into power).

Revelation 13:13 And he doeth great wonders (miracles, in the Greek), so that he maketh fire come down from heaven on the earth in the sight of men (as though it were in favor with God, as Elijah in 2 Kings 1:9-15),

Revelation 13:14 And deceiveth (a deceptive nation using miracles and “pharmakeia” in the Greek, as stated in 18:23) them that dwell on the earth (everyone is involved—including you) by the means of those miracles (same word as “wonders” in verse 13) which he had power (authority or ability, in the Greek) to do in the sight of the beast (the first persecuting kingdom); saying to them that dwell on the earth (everybody), that they (as people) should make an image to the beast (something that looks just like the previous, world-ruling, persecuting, church and state kingdom that blasphemed the God of Heaven), which had (past tense) the wound by a sword, and did live.

Revelation 13:16 And he causeth all (to force all, with civil authority), both small and great, rich and poor, free and bond (everyone is involved), to receive a mark (not a number) in their right hand (representing works), or in their foreheads (representing beliefs):

Revelation 13:17 And that no man might buy or sell (economic boycott to those who will not follow the dictates of their conscience), save he that had the mark (a symbol of their authority), or the name of the beast (name in the Bible represents character, like Jacob becoming Israel, Saul becoming Paul, Simon becoming Peter, Abram becoming Abraham, Sarai becoming Sarah, etc.), or the number of his name (the number is described in the next verse).

Because we are talking about the first beast of Revelation 13:1-10, and an image to that beast with the help of the second beast of 13:11-18, we should ask a few questions about that first beast.

What does he look like? 13:2 says he looks like a leopard, a bear, and a lion, right? He is the beast (kingdom/nation) that is made up of those animal-like characteristics. Why? Where does that come from?

Daniel 7 has those same beasts… except in the reverse order. Wait, what?!

It’s because Daniel was seeing a beasts from the FIRST of the four beasts (in Daniel 7:1-8), while John was seeing the same prophecy from a different time and place—from the LAST of the four beasts (John was seeing the prophecy from the beast called “a fourth beast, dreadful and terrible, and strong exceedingly” in Daniel 7:7). So, what were the beasts in Daniel 7:1-8? A lion, a bear, and a leopard, with the final beast not really having a description… Just like in Revelation 13:1-10, yet backwards!

It is well known that Daniel was a ruler in Babylon. The ram and he goat of Daniel 8:20-21 represented the nations of Medo-Persia and Greece (read it for yourself, it just says it). These all, Babylon, Medo-Persia, and Greece were all world-ruling powers (as described by the image of four metals in Daniel 2). Okay, so what was the NEXT, or FOURTH kingdom that came up after Greece that ruled the whole world? It was Rome! What kingdom came after Rome, which was given power from Rome, that was Christian (at least looking like Christ in all the ways mentioned in the chart above), that persecuted God’s people, and blasphemed God’s name, His tabernacle, and them which dwelt in Heaven (13:6)?

The first beast of Revelation 13:1-10 is none other than the Roman Catholic Church, the Papacy—a church/state which ruled and persecuted the world for 1260 years through and beyond the dark and middle ages.

What does it do? It empowers the next beast—in 13:11-18—to make an image to itself when it had power back in the dark day… That nation that comes up in an unpopulated area of the world, that has civil authority to cause all to worship, that has the desire to cause all to worship because of its lamb-like powers, which deceives the world with the miracles of healing (as it works with the Greek word “pharmakeia” as used in 18:23), which will enforce, demand, cause, all to worship the Papal system by establishing the mark or her ecclesiastical authority, is none other than America, the United States.

Read those verses again, looking for the Papacy, which received its power from the nation of Rome before it (13:2), and then look for America which is currently receiving its power from the Papacy to enforce all the come into line so that finally—in the future days not too far hence—the world will be caused to worship the Papal system which will demand all the bow to it, accepting the mark of their ecclesiastical authority—Sunday as the holy day (a day never having been hollowed or made sacred as Saturday, or the Bible Sabbath has been. See Genesis 2:1-3).

RevelationWithDaniel.com/revelation-verse-by-verse/. You can find the chapters you may be interested in, the notes, the audio, and please ask questions that perhaps I have already thought through, or may need to study further.