Skip to content
Previous Next
Mystery of Godliness – S.N. Haskell 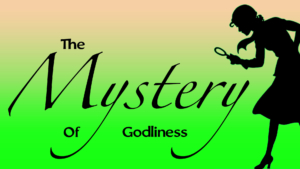 If the apostle had said, “Great is the mystery of God,” all at once would have said, “Yes we know that; but it is GODLINESS that is the mystery. It is God manifest in the flesh.” It is justification in the spirit. Such was the life of our great pattern, Christ. “The Word was made flesh, and dwelt among us, (and we beheld His glory, the glory as of the only begotten of the Father,) full of grace and truth.” John 1:14. Christ’s life on earth was simply the word of God dressed up in humanity. He came and lived from childhood to manhood as an example for His followers to copy. John 1:1,2.

In the following words we have the subject of the mystery more fully set before us: “Whereof I am made a minister, according to the dispensation of God which is given to me for you, fully to preach the word of God; even the mystery which hath been hid from ages and from generations, but is now made manifest to His saints: to whom God would make known what is the riches of the glory of this mystery among the Gentiles; which is Christ in you the hope of glory.” Col. 1:25-27, margin.

The word of God is the mystery, and when received in the heart and lived out in the life, it is “Christ in you the hope of glory.” It is a mystery to the unbeliever; only by faith can any know how the divine nature of the living God is in the Word. When we fully believe that Word, it brings Christ into the heart and life. This is the highest education that a human being can attain unto,—to simply believe, because God speaks, and let His life come in and rule the heart and mind. It is a great mystery, and will always be a mystery in this life. It is as unselfish as Christ was unselfish.

Christ left the glory of heaven and came to this earth to redeem a fallen race, that He might take all that accepted His word in their hearts and life to reign with Him, and give them a place higher than the angels that had never sinned. The redeemed will sit with Christ on His throne even as Christ overcame and is with His Father on His throne. But to none of the angels has Christ promised that honor. Heb. 1:13.

This was a mystery that was never revealed until Christ came a babe in the manger at Bethany. It is the gospel of Jesus Christ, and the result of mankind receiving it. It was grasped by faith by Adam as he brought his first sacrifice to the gate of Eden ; Abraham and all the faithful have believed the word of God and have thus received the abiding presence of the divine life into their hearts by faith. The only way to really become a partaker of the divine nature is to believe the words that God has given us, and believe them just as fully as if Christ stood before us in person and spoke them to us individually.

“The union of the divine and the human, manifest in Christ, exists also in the Bible. The truths revealed are all ‘given by inspiration of God’; yet they are expressed in the words of men, and are adapted to human needs. Thus it may be said of the Book of God, as it was of Christ, that ‘the word was made flesh, and dwelt among us.’ And this fact, so far from being an argument against the Bible, should strengthen faith in it as the word of God.”—Testimony for the Church, Vol. V, p. 747.

The key that unlocks the mystery of salvation, is to accept the words of God as if spoken to us personally; when we walk out by faith on the promises of God, we are walking with God, His presence goes with us. It is within the reach of high and low, learned and unlearned. It is simply to throw doubts and unbelief to the winds, and believe what God has said and risk our all upon it. God will never let one perish that really trusts Him for help. When the storms arise, if he turns to Christ, that soul will find that Christ is near at hand to help and deliver. Matt. 8:23-27.